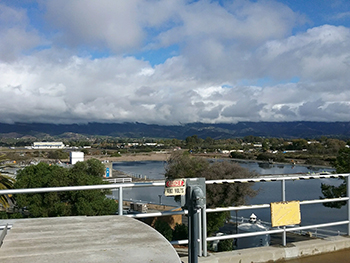 The District established several funds in which revenues are deposited and are used as sources for District expenditures including capital improvement projects. The funds accounting system addresses the District’s service needs in a very responsible fiscal manner.

This fund's balance supports eight months of operational expenses. This fund is very important to the operations since the District does not invoice for its services monthly but collects its fees with the property tax bill. The District receives its fees in two lump sum payments; one in April, and the other in December. It is sound practice to maintain an operating fund that would account for about eight months of operating expenses to cover expenses between payment cycles.

This fund is for addressing plant emergencies. The contracts among plant users specify that this fund must not exceed $25,000.

This reserve fund is mandated by legislation to account for capacity expansion projects of the District’s facilities and is funded from connection and annexation fee revenues.

This fund is mandated by the State Water Resources Control Board (SWRCB) in its guidelines for development of facilities’ Financial Plan and Revenue Program (FPRP). This mandate requires annual funding of the facilities’ depreciation for the basic replacement of components of the existing facilities.

In December 2004, the District’s Governing Board acted to provide medical insurance coverage for District employees upon retirement. In order to mitigate the impact of such benefit, the Board directed that a sinking fund be created for future payments of medical insurance premiums of District retirees.

This fund does not carry any balances since its is used for management of the debt service of the State Revolving Fund (SRF) loan for the outfall re-rocking project. The revenues into this fund are disbursed within the same fiscal year, leaving no balance in the fund.

On May 7, 2007, the District’s Governing Board acted to establish a separate fund designated as the “Plant Upgrading Fund” to pay for the Upgrading Project costs. Revenue from the District’s users for this project in addition to any future funding sources of the project will be deposited in this fund.

This fund was established as a separate, designated “Emergency Fund” for the purpose of paying costs associated with emergency projects.