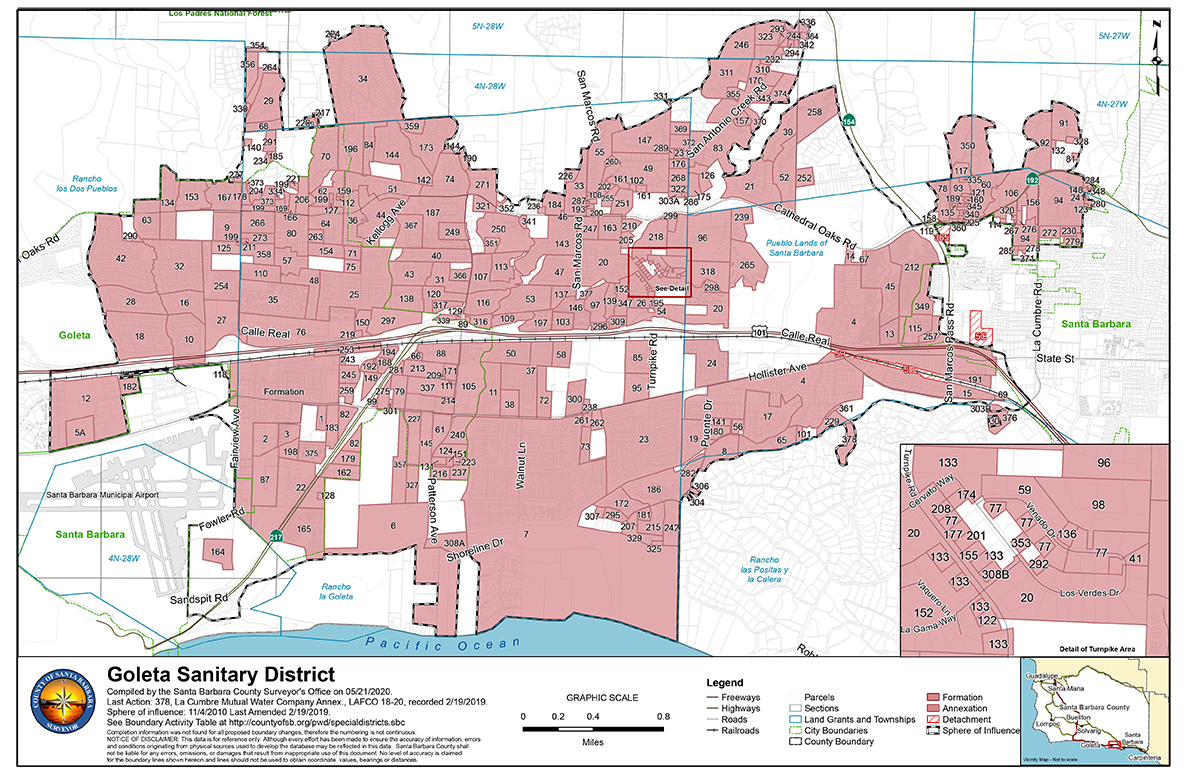 The District has scheduled the first round of public hearings for Monday, Nov. 1st, 2021 at 6:30 p.m. and Saturday, November 20th, 2021 at 11:00 a.m. Both meetings are scheduled to be held at the District's headquarters at 1 William Moffett Place across from the Santa Barbara Municipal Airport. Members of the public can learn about the process of transitioning to district-based elections and how they can help draw the new voting boundaries. For more information, please contact Laura Romano, This email address is being protected from spambots. You need JavaScript enabled to view it. or call 805-967-4519 x.128.

A second round of public hearings to receive community input on draft maps is tentatively scheduled for March 2022.

Currently, each of the five governing board members is elected at-large (from anywhere within the District’s service area). In the future, one governing board member will be elected from each of five separate voting districts. The voting districts will be developed based on the new 2020 census data and input from the community. Moving to district-based elections will help ensure equal representation for all areas within the District’s service area. In 2022 two seats will be up for election, in 2024 the remaining three seats will be up for election.

The Goleta Sanitary District is one of several local governments which will be changing to district-based elections (others include the City of Goleta and the Goleta Water District). The District is working with Lapkoff and Gobalet Demographic Research Inc. to develop potential boundaries of the five voting districts that are sensible, geographically contiguous areas with near equal populations. There will be several public meetings throughout this process with opportunities for public input. If all goes as planned, the first district-based election will be held in November 2022.

Because the District’s Board of Directors recognizes the importance of making sure that all residents of the Goleta Sanitary District will be fairly represented and have opportunities to participate in the transition process, this page will be updated as meetings and hearings are scheduled, or any new changes are known.

What’s the difference between “at large” elections and “district-based” elections?

We currently have an at-large election system, where voters in the entire Goleta Sanitary District service area elect all members of the Board of Directors. “By-district” elections divide the jurisdiction into geographic districts. Voters in each district choose their Director, who must also live in that district. Registered voters will not be able to vote for Board of Directors candidates from districts in which they do not reside. Under the timeline adopted by the Board of Directors, a series of hearings and meetings are expected to take place beginning in the fall of 2021 with a final series of adoption hearings sometime in the spring of 2022.  The first district-based elections will occur in November 2022.

What criteria are used to create election districts?

Many factors may be considered, but population equality is the most important. Other factors include:

What are communities of interest?

A community of interest is a neighborhood or community that would benefit from being in the same district because of shared interest, view or characteristics. Possible community features or boundary definitions include:

When election districts are created, who decides the boundaries?

A professional demographer is hired by the District to create proposed district boundaries, with suggestions and feedback from residents. Residents will be able to provide input on boundaries and suggested criteria for creating boundaries. The districting process will be transparent and accessible to all residents. Ultimately, the Board of Directors adopts an ordinance establishing district boundaries.

If you have any questions regarding the transition process, or have input regarding communities of interest, please email Laura Romano, Management Analyst: This email address is being protected from spambots. You need JavaScript enabled to view it..